Tlaxcalans of Barrio de Analco have been largely forgotten.

“Analco” was a Nahuatl word, meaning “on the other side of the river.” The barrio sat on the south side of the Rio de Santa Fe, while the north side was occupied by the Spanish settlers and contained the Plaza and Governors Palace.

In 1964, I published my first “scholarly” article on Southwest history. It appeared in the New Mexico Historial Review and dealt with the little-known Tlaxcalan Indians, who can be considered as something of a lost people, on the outer margins of American history.

Over the years I’ve remained interested in the Tlaxcalan story. Now and then, I’ve been able to add a few additional pieces to the picture.

There is a small state east of Mexico City today that is called Tlaxcala. It encompasses the tribe’s original homeland. The native language was Nahuatl, the same as spoken by the Aztecs whose powerful empire lay directly to the west.

When Fernando Cortez initiated his conquest in 1519, he met and befriended the Tlaxcalans. They had suffered dreadfully at the hands of the Aztec enemies and looked upon the Spaniards as deliverers.

The Tlaxcalans furnished Cortez thousands of warriors to augment his small army of soldiers. Their help played a major role in bringing down the Aztec state.

The Spaniards never forgot this assistance and the king granted the Tlaxcalans a number of political, social and economic privileges denied to other Indians. For instance, they were exempted from certain tribute payments and allowed to carry European arms.

Because of the special status, the Tlaxcalan Indians loyally served the Spanish government and church. In the latter 1500s, many of them were recruited as colonists on Mexico’s dangerous northern frontier.

Missionaries liked to use them as teachers, believing that they served as a healthy role model for the wild Indians they were trying to convert. Mine owners found that they made excellent laborers and paid them well. And everyone agreed that Tlaxcalans were superior fighters.

In 1591 a thriving Tlaxcalan colony was established on the outskirts of the frontier town of Saltillo. For the next century several proposals were floated to move some of those Indians northward across the Rio Grande to aid in settling Texas.

The only ones who actually went were nine families sent to the new San Saba mission in central Texas, built as an Apache refuge in 1758. But hostile Plains Indians destroyed the place and massacred most of the inhabitants a year later.

So, what about New Mexico? No formal settlement of Tlaxcalans was established here by the government, but numbers of the Indians found their way into the province, as servants of Spanish officials or as free laborers attached to wagon trains coming up from the south.

A member of the Antonio de Espejo expedition of 1582, for example, was a man named Gregorio de Tlaxcala, referred to as an expert in the carving wooden gunstocks.

After their arrival in New Mexico, the Tlaxcalans congregated in their own barrio, or neighborhood, at Santa Fe. It was called, and is today still known as, the Barrio de Analco.

“Analco” was a Nahuatl word, meaning “on the other side of the river.” The barrio sat on the south side of the Rio de Santa Fe, while the north side was occupied by the Spanish settlers and contained the Plaza and Governors Palace.

Franciscan friars constructed an adobe mission in the heart of Analco for use of the Indians. This San Miguel Chapel is now one of the Santa Fe’s leading tourist attractions and is often advertised as the oldest church in the United States.

In the Pueblo Revolt of 1680, the Tlaxcalans suffered along with the Spaniards. Their houses and San Miguel Chapel were burned by the rebels, and with the Spanish withdrawal they retreated to new homes in El Paso.

When the reconquest began in 1692, most of the Tlaxcalans seem to have remained in El Paso where they were soon assimilated by the local population.

A few, however, returned to Santa Fe with Gen. Diego de Vargas and reclaimed their former homes in the Barrio de Analco. They also assisted in replacing the roof over the burned-out shell of San Miguel.

A document of 1782 in our Spanish archives mentions an Indian of Analco, Juan Brito. Historian Ralph E. Twitchell many years ago identified him as a Tlaxcalan. If so, that is the last reference we have to these Indians.

As happened in El Paso, they lost their Indian identity and culture and merged with the general Hispanic population. Unfortunately, information about the Tlaxcalans is very scarce, so their remarkable adventures in pioneering have been largely forgotten.

Now in semi-retirement, author Marc Simmons wrote a weekly history column for more than 35 years. The New Mexican is publishing reprints from among the more than 1,800 columns he produced during his career. 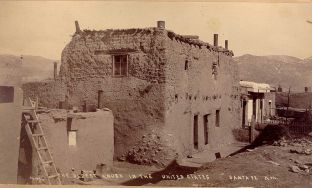